Well, this happened on Monday 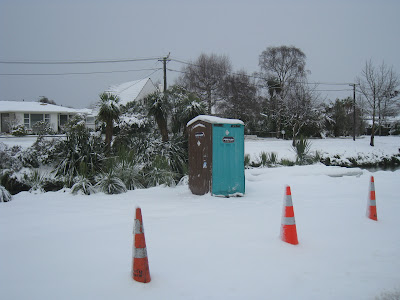 So, needless to say I had no work! Like any good wargamer, I thought I would get some painting done, and this is what I came up with. My unit of Hussars! These chaps are more Hanoverians, representing the King's German Legion Hussars. The main difference between these and British Hussars is simply the colour of their Bearskins- British had black (like the guards outside Buckingham) whereas these chaps have a brown Bearskin. The models come from Front Rank, and are pretty reasonably priced, with some pretty good detail. It is actually a bit weird to be painting lead again after all the plastics! 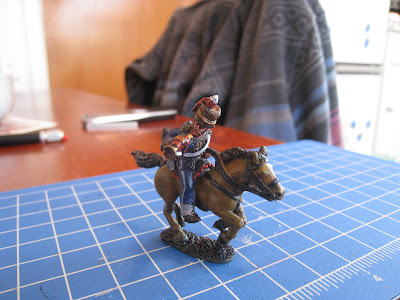 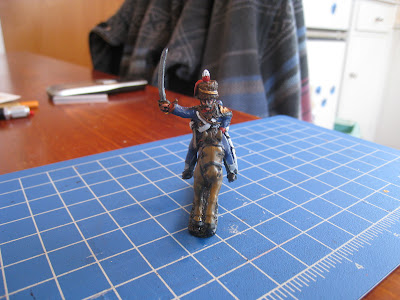 And a standard Hussar.

I must say, it was nice to paint something not red for a change, but the horses seemed to have no inspiration for me! Luckily for me, that is all of the cavalry I have to paint for the army. Not sure how I would cope painting an entirely cavalry army, like some people are doing!

As for why I have KGL Hussars? Well, late in the day at Waterloo, Wellington placed his light cavalry (Hussars and Light Dragoons) behind the squares which were a bit more shaky, especially those of the Hanoverians and Brunswickers to give them a morale boost (and stop them clearing off!) and also to clear out any French cavalry that attempted to envelop the squares!

So with them done, that just leaves 3 infantry units and 1 artillery unit. All before the end of August. Plus all the bases. Oh and did I mention I have no idea how I am going to transport it?

Do you have a flag?

So, in spite of the chill in temperature, I managed to get the start of some painting done, and got some flags attached. 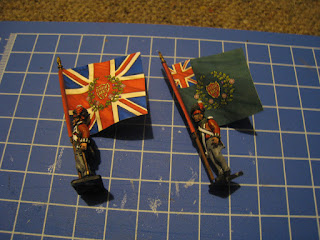 Here are the Regimental and King's colours for the 73rd Regiment. 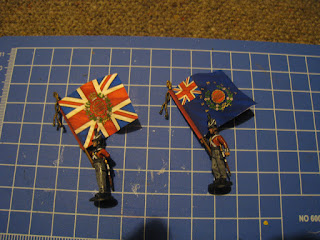 And here are the colours for the Kings German Legion Regiment.

My flags come from GMB Designs, which I ordered from here. I paid about $5 per flag, plus another $5 for total postage. Overall, I am pretty happy with them! They require a bit of cutting to make them fit properly onto the banner poles; but it is really no extra drama. So I ordered enough flags to cover my whole army (the Guards, the 5th British Brigade and the Hanoverians), but I will do another order, I really think I will use them for my next force (probably frenchies...) as well as when I add more regiments to the army to make sure I can use it as a standard Infantry core, as well as Guards.

So, in short, I highly recommend GMB. They are on the expensive side, but... I am alright paying the little bit extra for quality, especially when flags are such a notable part of the unit!

In case you didn't know the importance of the flag, here is comedian Eddie Izzard explaining why the flags were so important!
CP
Posted by Chris at 20:56 7 comments:

Now, if that isn't a classy title for a regiment, I don't know what is! These chaps also were known as "Duke of Wellington's Own"- which has in modern terms simply become the Dukes. They got the title as they were the regiment that Wellesley served with before his meteoric rise to dukedom! 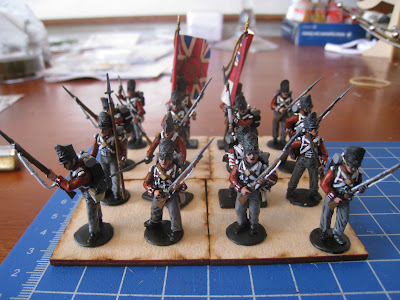 Here is the full regiment, a normal sized lasalle unit. Now there has been a bit of talk this week about Lasalle basing, and how many figures per base is appropriate (here). I am going to opt for 4 per base, but I will make up a couple of mock bases and show you guys in the future, just to see what you think.

Anyway, back to the 33rd. Now, one of the guys down at the club had some spare Victrix peninsular sprues, which I gladly snapped up, so here is the officer for the 33rd, still resplendant in his Peninsular uniform- including Bicorne! 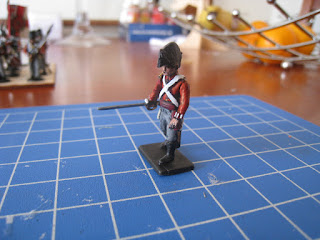 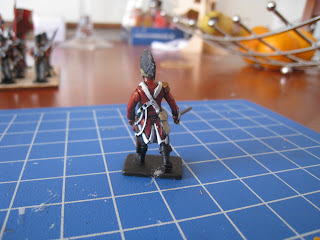 And lastly from the 33rd, those people who actually gave the regiment a good look (one or two of you I assume), will notice these in the rear rank.... 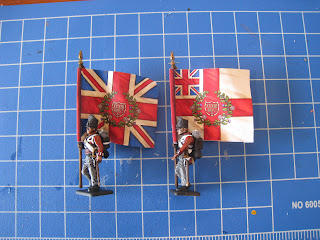 The Kings Colour and the Regimental Colour, from GMB designs. More about flags tommorow however!

I also managed to finish off the other two Generals for the army, first is a Victrix Highlander from the 73rd, 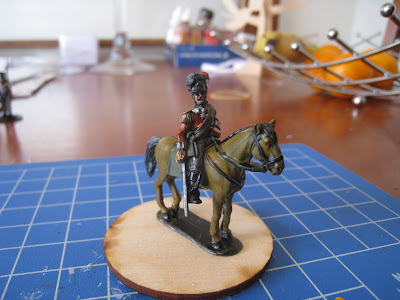 And second is a Hanoverian Landwehr commander, which was converted using Victrix Hanoverian parts, and marrying them to a Victrix Highlander- with a very good result in my opinion! 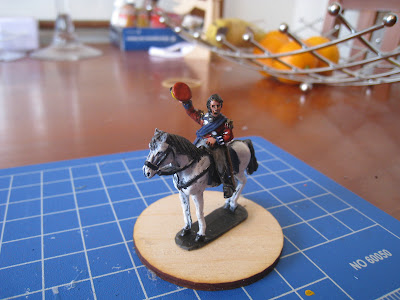 This chap will be in charge of my Hanoverian detachment (Brunswick Support in Lasalle).

And what of an anecdote from Waterloo? Well, the story of Lord Uxbridge (the commander of the British and allied cavalry) is probably the strangest (and possibly untrue). The story goes that late in the day that Uxbridge rode off to meet Wellington, to tell him to get back off the front lines, for fear he might get shot.

Then, Uxbridge himself was struck in the leg by a cannonball, shearing it clean off. To which he stated,

The only thing this story reminds me of? Is Monty Python.

Well, time for hockey, hopefully will get some painting done tommorow,

Bases were one of the issues that I hadn't resolved for the army, I started by attempting to cut 50 x 50 squares of plasitcard, and failed miserably. So, I instead turned to an American company called Litko (http://www.litko.net). I ordered plenty of 3mm thick MDF 50mm squares, some 50mm round bases to serve as my Generals bases, and some 150x75mm bases to make my artillery on one whole base. Ordering from them was painless, and honestly, I don't mind paying for the bases since my own attempts were so terrible! Also as a note, I sent them an email enquiring about shipping times and got a prompt email back, from an actual person, and they also asked questions about the recovery in Christchurch. All that, to me is very important! One thing I really do miss by shopping online is the customer  service aspects, given the choice I think I would tend to buy based on the better customer service!

Well, so the bases arrived on Friday and I only managed to get around to doing something with them this morning. Here is the army as it stands, all nicely out on bases 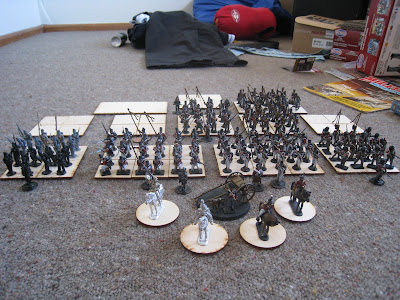 The empty wooden bases represent things which I haven't even assembled yet, and the left most unit in the front rank is the 33rd, currently awaiting paint! Hopefull I will finish them this week, plus those two colonels in the front too; then who knows, maybe I could work out a basing scheme for myself? 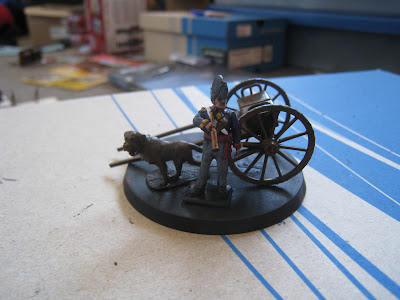 As for actual painting, all I managed to get done is this Warlord Games mastiff, which will give the Artillery colonel some company on the objective marker! He also represents the 120th 28mm infantry figure that I have painted so far for my British, and by my count, I have another 80 infantry to go....

Lastly, next time you wargamers have a tape measure out, measure 21 inches. That was the distance the British Army were expected to stand from the person next to them. Doesn't seem like a very long way does it?

Well, I think it is about time to assess what I have actually finished (albeit not based) and what I still have left to do for Call to Arms (which is next month....). The British force that I will be taking is based on the 1st Corps at Waterloo (commanded by the Prince of Orange) and made up of the 1st Infantry Division (Guards) supported by the 3rd Infantry Division.

The order of battle looks something like this at the start of Waterloo...

In Lasalle terms, this means I need...
Then for support, I will run the Brunswicks, representing the Hanoverian detachments,
Plus also the 4 Commanders, of which I have painted two.

So, I need to finish the 33rd, 73rd, 2 Landwehr units, 1 artillery battery, 2 Commanders and 1 Hussar unit. All in a month. And lets not forget, I haven't actually based anything yet! I probably need to get myself in gear....

As for your Waterloo trivia? This quote comes from John Kincaid, an officer with the 95th Rifles (yes there were other officers to Sharpe in that unit!)- "The 27th Regiment were lying literally dead in square, a few yards behind us. I had never yet heard of a battle in which everyone was killed; but this seemed likely to be an exception". The fact that the 27th did not break, according to Wellington saved his centre from being overwhelmed.

I expect big things from my Irish when the hit the tabletop!

It has been a week since I last posted. Whoops! I meant to get more done, faster. But, it just didnt happen that way!

Anyway, here is what you really want! The 3rd Regiment of Foot Guards (Scots Guards) in their completed glory! Together with the Coldstreamers, they made up the 2nd (British) Guards Brigade, under Major General Byng. At Waterloo they were tasked with defending the Hougoumont farm, which is a very long story that I can't be bothered going into here! 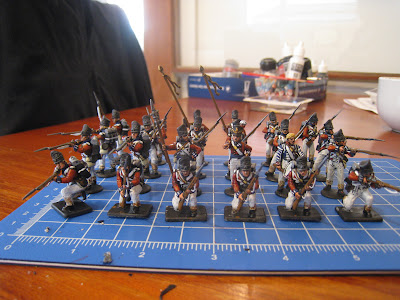 I got these guys done over the past 3 days, painting about 8 per day. Not the most industrious, but not bad. 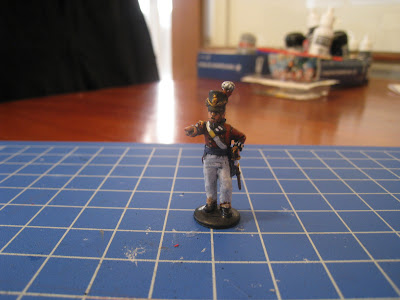 Here is their officer, looking far better than he did last time I posted! Yikes, these photos are dark. I do need to look into my photographing.

So, in keeping with my random Napoleonic anecdotes that seem to be proliferating this blog; on the note of Curiassers. Now, after the battle at Quatre Bras the 92nd Highlanders, after a long hard day of suffering through repeated cavalry and infantry attacks finally got a respite. They also got some steaks to eat. So, the story goes that French prisoners were being marshalled past Highlanders cooking steaks on the curiass of fallen French cavalrymen! Apparently they worked very well, despite the musket holes. The prisoners thought the Highlanders cannibals, further adding to their fearsome reputation!

Well, with the Guards done, I actually don't have another unit ready to paint next, so there will have to be some assembling done, but there are still a few more normal sized infantry units to finish......