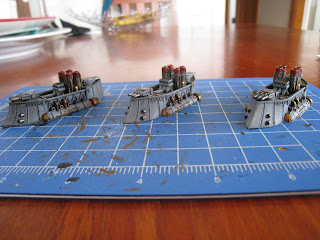 Not the greatest of pictures, but you get the idea. Hulls are a lovely shade of rusted Battleship Grey! More pics later on today hopefully, my camera just ran out of charge.

In terms of the game, the Kingdom of Brittania cruisers are underwhelming. They have two main turrets which have the same firepower as battleships, torpedo ports and a broadside capability. However, they sink anytime anyone looks at them funny. To prevent that, they have the option of a shield generator, which comes in place of one of their primary turrets- but to my mind, losing a primary turret means they become altogether more useless. So these three all have both turrets, and damn the consequences!

I am also looking forward to our proper Market Garden game next week (Oct 1st). My force will be representing the various ersatz Luftwaffe kampfgruppen, hastily thrown together in an attempt at blocking the allied advance around Nijmegen. So, it will be a challenge! I will be defending the centre of the table against both the 101st and the 82nd Airborne divisions, and holding out until the SS can counter-attack. All this with Reluctant Trained troops; assure the Furher that my old men and boys from the flak batteries will hold!

Next on the painting table is more Dystopian Wars ships, I am hoping to get enough done to start having some games in a week or two! Plus there are a few more things I need to sort for my Luftwaffe...

Well, first things first. Tankiversary. Last week marked the first time the Tank was used in combat. So, to commemorate that, here is my favourite tank, the Jagdpanther! 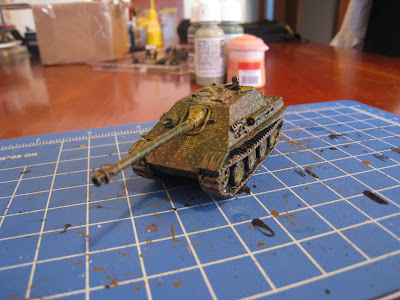 Armed with the long 88mm gun, with heavy, sloping armour and looking as nasty as a tank can be, the Jagdpanther is easily my favourite! I brought my 5 tanks out last week to give them an update, the one above has Step 1 completed; the blacklining done. I will add some decals, and perhaps more weathering.

Dystopian Wars is something that has always, always tempted me. It is a Victorian Steam Punk style game, based around naval fleets clashing over vast oceans, with support from Air units too. I like it because the game mechanics are pretty simple, but more than that, the models are simply fantastic! They have been designed using 3D rendering programs on a computer, then cut the molds from them. This means that the detail on the models is quite simply absurd- these ships have stairs! Simply put, they are jokishly pretty and are a dream to paint.

So, when I saw them on the shelf in a gaming store on my recent trip over the ditch, there was only going to be one result. I invested, relativly heavily! 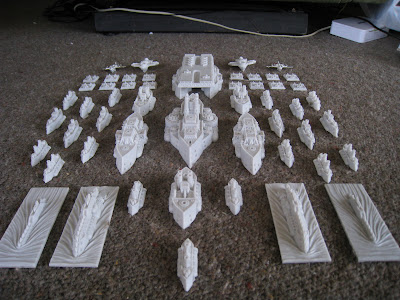 So, this is my entire Kingdom of Brittania fleet! I will do a total list of what is there tonight, but for right now, here are my first few painted vessels. 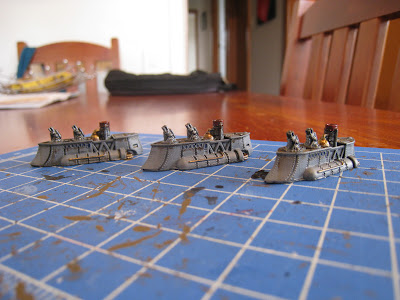 These are Bastion Class Escorts. They have no main guns, but are equipped with Anti-Aircraft and also Anti-Torpedo capability to add to the capital ship that they are defending. I like the rusted-grey look I have gotten there, should look really good as a whole fleet!

Well, there has been plenty of talk of late about Lasalle here in Christchurch, I have done my best drug-dealer impersonation by getting Jason hooked; and Jamie is not far away (whether he knows that or not!). So, with Jas starting some Peninsular British, it seemed only fitting for me to start some Peninsula French.

The French Army that was sent to the Peninsula was.... ecclectic. There were a few veteran troops, but the majority was made up of fresh conscripts- lets be honest with Russia going on, quality French soldiers were well stretched! These conscripts were fresh, and had a pretty mixed review when it came to combat. In addition there were one of my favourite Napoleonic units, the Swiss. These guys were mercenaries, who fought for Napoleon in almost all of his campaigns, and were some of the best troops in his army. Interestingly, the swiss did not fight in the Hundred Days (which culminated at Waterloo), because after the exile of Napoleon (for the 2nd to last time), the swiss had formed an agreement with the returning monarchy, which they honoured rather than returning to fight for Napoleon. Plus, they wore standard French uniforms, but in red!

So, without further adieu, here are some simply horrible pictures of my first stand of French, which is a stand of Swiss! 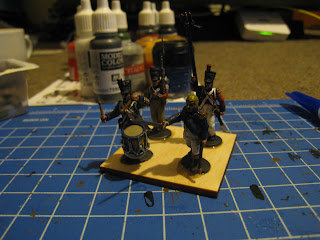 I will get better pictures tommorow, turns out lounge room lighting, at 10pm is not really the ideal photo conditions....

And for those who read this for Flames of War stuff, my typhoons are progressing well. They are all at the stage of getting blacklined with a lovely ink pen, which takes fricking ages. And is boring as sin to do. So I would expect it to take a fair while, like a week very much on and off, where I will do some for 5 mins, then do something else. Like paint Napoleonics! 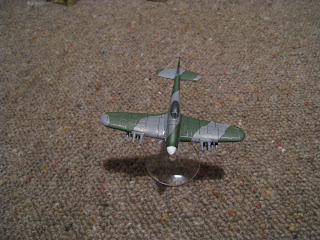 Here is one, showing off some of the blacklining. I will add some decals, then it needs a big coat of matt varnish.

Next? More Peninsula French!
Posted by Chris at 22:19 9 comments:

Well, the Lasalle game at Conquest has become a bit of a no go. People couldn't make the trip down, and it was becoming more of a hassle than anything else! So, instead we (Nick, Craig and I) are going to play FOW. In addition to that, I am going to head up to the BF Grand Tournament in Auckland, and I have decided to play the same army both times.

So with plenty of speculation of lists for Conquest going on in various places on various blogs, I suppose I had better throw my hat in too!

I am planning on my Coldstream Guards Rifles, taken from Hells Highway. Now remember that these guys were half finished at the end of the Snow Challenge, so there is a fair bit more painting I need to do to get them tournament ready....

So, this is the start of the "Second Wave" of my Coldstreamers, the first things being some support from the Royal Air Force! 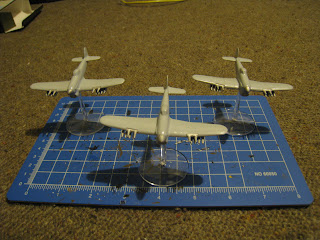 My flight of Typhoons, looking like they really need a coat of paint! That is the weekend's job. 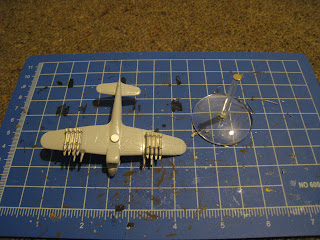 Showing how my typhoons are attached to their bases. I was unsatisfied with how my other BF aircraft tended to get scratched or otherwise damaged when I put them onto their bases, so from now they will all use the magnets from boxes of tanks, one on the aircraft, one on the base. It makes a brilliant connection, and will stop me scratching the Tiffies when I game with them!

So, these are the start of the 2nd Wave, more pics of the rest of the wave tommorow, plus some paint on my RAF. And maybe even a list?

So, the challenge has finished last night, when we had our practice Market Garden Total War game. 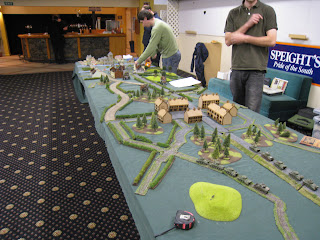 The table itself was suitable massive, representing from JOE's bridge, right to Arnhem, with Nimejen and Eindhoven in between. The Welsh guards started at the bottom right of that shot, and their goal was to cover the 12 feet to link up with the Paratroopers. So how did the game go? For the allies- poorly. 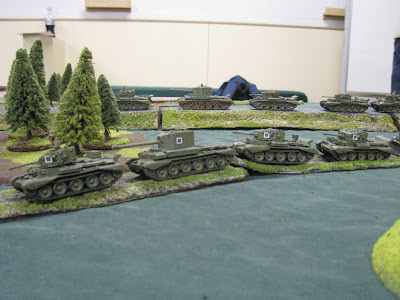 This was the best that the Welsh Guards looked all game, from here, those nasty Fallschrimjager of Jason did nasty nasty things to the poor tankers.

As for Arnhem? Well.. the british paratroopers didn't have enough troops to hold of a massive Grenadier Horde (von Tettau), and so eventually capitulated.

As for the middle? Well, the 82nd achieved all of their objectives! 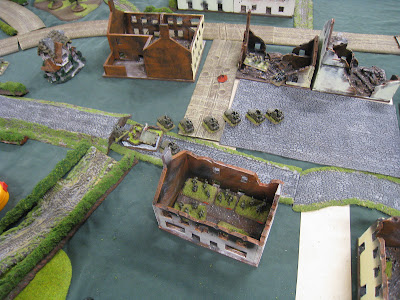 First objective secured after some house to house fighting! 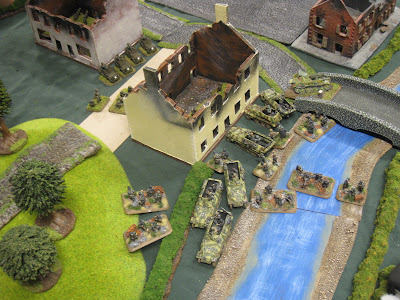 The inevitable German counter attack- which was met by the might of the Beep Beeps! 50 cals do nasty nasty things to halftracks- actually to that end, so do Paratroopers with gammon bombs.... 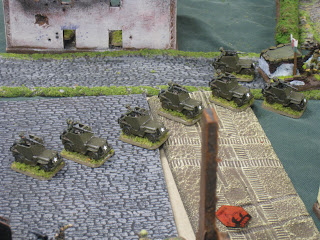 The Beep Beeps, holding the centre of Nimejen.

Well, the challenge is over, my Paratroopers are painted. Well, 1200 points of them are! I need to adda few things to both them, and to my Guards Rifles. But... I don't really want to do another challenge for a while, that was too many late nights painting..... 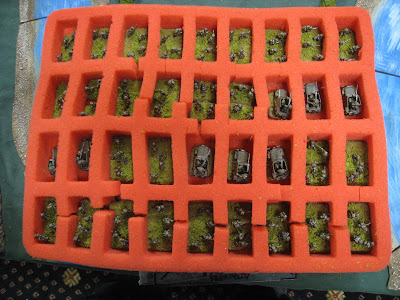 Thats the whole lot of them! So, none of that was painted this time last week....