So, building has been completed on the ASLAV, the weather has cleared enough for me to undercoat ASLAV today, so paint should start tomorrow (all going well).

Adam correctly pointed out that my ASLAV was missing a spare wheel on the back. I had the plan of making a cast of one of the imprint wheels from green stuff, then build up the rest of the wheel from green stuff. Seemed to be a good plan, except I made an absolute hash of it! So, flagging that entirely, I opted to make my spare wheel with a cover on it. All the photos I have seen of the ASLAV show it without a cover, so I am using some artistic licence. I made it from a couple of 16mm washers, covered liberally with green stuff. I added a recognition panel to the cover to make it a bit more interesting. I plan to paint the cover in the desert AUSCAM, need to double check on the colour for the recognition panel tho 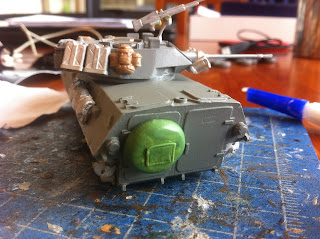 Another thing that which was missing from the kit was the ammo box for the pintle mounted FN MAG 58, so I whipped one up from some Green Stuff. I think that is all the building I am going to do, I could keep covering it in kit, but I do like the Australian vehicle camo, so I want to keep plenty of flat panels for the camo scheme. 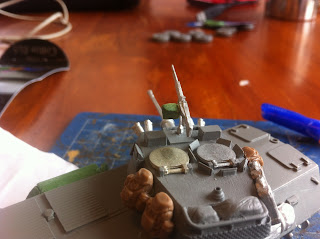 So, off to undercoat the ASLAV, hoping to get the paint on it tomorrow.