So, as time rolls on, the inevitable occurs, it is time for Day of Days again! This year it is a doubles tournament, themed around the relief of Stalingrad. So Mid War, and none of the REALLY cool toys for the Germans, just PaK 40s....

Nick and I are working together again, after my successes last year with tanks (8 tanks, fielded in 4 games. 32 total tanks, 31 destroyed...) clearly the only solution was for me to bring tanks AGAIN! The kaiser won't be expecting that...

To balance the Axis/Allies, we opted to play for the Allies, meaning both Nick and I needed to get a Soviet Army! Tankovy was not to hard to get, Nick had the hard task of getting a Cossack army! To be fair, it was his fault for choosing the ponies...

My force of Guards Tankovy works out as..

I chose again to use my winterwash technique using the sponges out of blister packs, and quickly worked up my force. 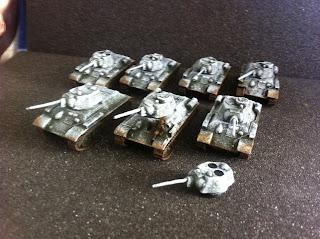 There are two more T-34s, which somehow missed this shot... 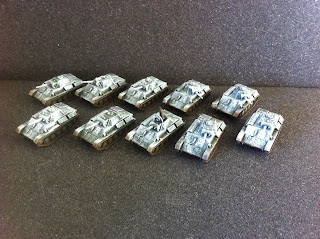 10 Plastic Soldier Company T-70s. I was really impressed with these, and plan to write something up about them in the future. 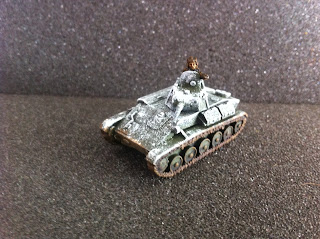 Lastly, the Company Commander in his T-70

Another tournament special thing is that in some rounds, we may get air support. So, I picked up a cheap plastic Zvezda LaGG-3 fighter- mainly so I can complain about lag if it doesn't come in! 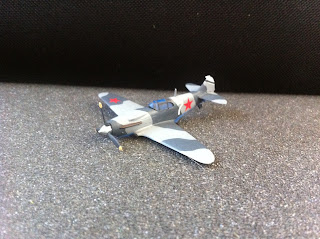 The colour scheme has been taken straight from Google- this is the paint scheme on a LaGG fighter on display in Moscow. And conveniently, it works perfectly with my Winterwash colour scheme!

So there it is, a quick little update, I plan to do an AAR following the tournament. Big question, will I lose more than 31 tanks?